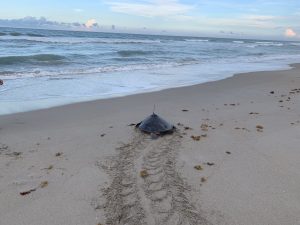 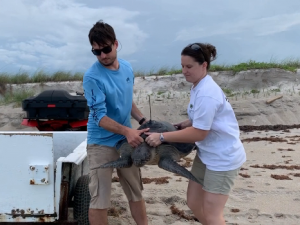 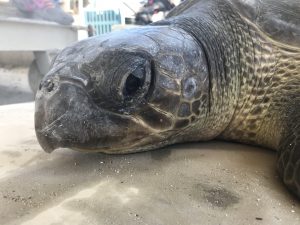 Jasper was originally encountered at our St. Lucie Site on May 11, 2019 and released later that day.  Olive ridley sea turtles are a rare occurrence in Florida and only a handful have been documented over the decades.  Based on his carapace length, Jasper was deemed an adult and due to his tail length, a male. He weighed roughly 67 lbs and had a very healthy body condition.  Because of this, Jasper was a great candidate for a satellite tag, which was applied in collaboration with Gumbo Limbo Nature Center.  The tag is expected to stay adhered and transmit for several months, but has the potential to last up to a year.  During this time, we’ll be able to see where he goes and hopefully better understand why this olive ridley made its way to our backyard.  For an update on Jasper’s location, take a look below*:

Note: If you notice Jasper tracking on land, it’s due to the reception of his tag.  Rest assured, he is in the water where he belongs.