Lake Worth Lagoon (LWL) is a 20 mile long body of water located just west of the Atlantic ocean along the coast of Palm Beach County, Florida.The lagoon was historically a freshwater lake, but today it is a moderately polluted estuarine waterway that receives ocean water from two man made inlets, the Boynton Inlet and the Lake Worth Inlet. Concern about the lagoon’s health prompted Palm Beach County’s Department of Environmental Resources Management (PBCDERM) to implement a habitat restoration and enhancement plan in the mid 1990’s. One of the goals of this plan is to attain and maintain the biological

integrity of the ecosystem which supports the diversity of fisheries and wildlife, including endangered and threatened species. This directive specifically includes research that should be conducted to understand the extent of utilization of the Lake Worth Lagoon habitat by sea turtles. To implement this directive, PBCDERM asked Inwater Research Group (IRG) to conduct preliminary surveys of marine turtles in Lake Worth Lagoon. IRG evaluated abundance and species composition of sea turtles in the Lake Worth Lagoon by utilizing visual transects to identify areas where turtles aggregate. Then, netting and hand capture operations were conducted in areas identified by these transects as sea turtle hotspots. 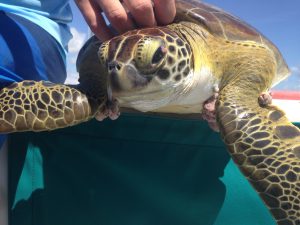 Sampling in Lake Worth Lagoon began in 2005 and has been conducted annually. This research project is the first in-water assessment of marine turtles ever conducted in Lake Worth Lagoon. Partial funding for this project was secured through the Sea Turtle Grants Program. Over the course of this study, IRG has gathered substantial amounts of information on species distribution, abundance, size class structure, diet, sex ratio, and genetic origin of sea turtles within LWL. Also the prevalance of fibropapillomatosis (FP), a potentially deadly disease that occurs at high rates among sea turtles in Indian River Lagoon and Florida Bay, was looked at over the course of the study. In early 2016, IRG published a paper on our research efforts on this project. If you would like a copy of this paper, titled Green turtles (Chelonia mydas) in an urban estuary system see our publication.