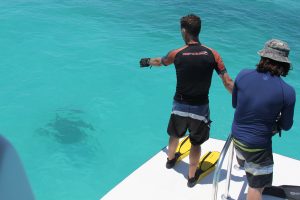 One of IRG’s oldest projects, Key West National Wildlife Refuge (KWNWR) contains a portion of the United States only continental coral reef tract as well as numerous coral patch reefs, extensive sea grass beds and mixed hardbottom/sponge habitat. These protected areas, including the numerous keys within the refuge, provide important nesting and foraging habitat for sea turtles. While sea turtle nesting was thoroughly monitored in the refuge, relatively little was known about sea turtles inhabiting the refuge’s waters. In 2002, refuge managers tasked IRG with the first in-water surveys for sea turtles. The work has led to numerous insights into how different species of sea turtles utilize different parts of the refuge. Hawksbills, a more tropical species, were found over shallow seagrass beds, on sponge beds, and along a submerged man-made jetty. While hawksbill turtles occasionally nest in Florida, the ones found in the refuge were immature. Genetic testing showed that most of these turtles were born on beaches in Mexico and possibly in nearby Cuba. IRG also located habitat where adult green turtles reside between nesting migrations. This was the first documented adult green turtle foraging ground on the east coast of the United States. Captures at this location allow IRG to also study rarely encountered male and subadult green turtles. As one of IRG’s longest running projects it has been supported by a variety of funding agencies including the Key West National Wildlife Refuge. In 2017 it was supported by the Gulf of Mexico Alliance – Gulf Star Program and the Sea Turtle Grants Program (Grant #17-048R). The Sea Turtle Grants Program is funded from proceeds from the sale of the Florida Sea Turtle License Plate. Learn more at helpingseaturtles.org