Adoptions are shipped to contiguous U.S. No international shipping at this time.

Classroom Turtle Adoption with Mascot ($30) include: 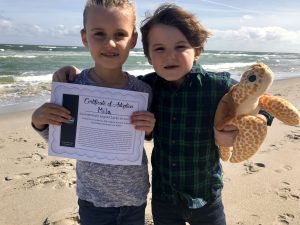 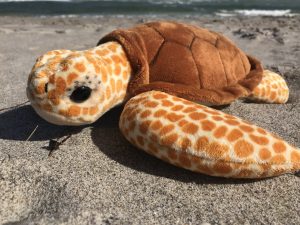 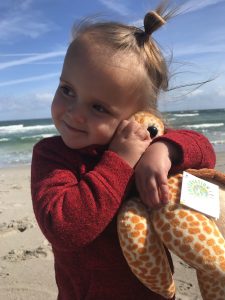 This loggerhead was first encountered by biologists at the St. Lucie Project all the way back in 1989. At that time the turtle’s shell was only 25 inches long it did not exhibit any adult characteristics. However, a blood test revealed it was a maturing male. Since that initial sighting the loggerhead has been re-encountered a record 48 times at this study site! While Inwater Research Group (IRG) biologists rarely name the turtles they collect data from, we just had to name this frequent flyer “AJ” after his flipper tags AAJ723 and AAJ724. In 2008, AJ’s tail began to grow significantly showing the first external signs of being an adult male. At the time of AJ’s last capture his shell had grown to 31 inches. While still under the official shell size of an adult, AJ now exhibits all the typical characteristics of a mature, mating loggerhead. These include the long tail that extends far past his shell, a soft slightly concave plastron, and a large hook shaped claw on each of the front flippers.

AJ’s frequent captures at the St. Lucie Project provide a rare opportunity to track the growth of a wild male loggerhead sea turtle. Since male turtles don’t come to the beaches to nest, they are rarely encountered by biologists. The IRG team is patiently waiting for their next encounter with this incredible turtle.

In April 2010, the Deepwater Horizon oil spill affected hundreds of thousands of young sea turtles living in the Gulf of Mexico. Numerous organizations, including Inwater Research Group (IRG), worked tirelessly to find and save as many turtles as possible during the course of the spill response. Oiled turtles were taken to a series of rehabilitation facilities to be cleaned and cared for before their eventual release into clean waters. One lucky Kemp’s ridley was found covered in oil and sent to the Institute for Marine Mammal Studies in Gulf Port, Mississippi. The turtle was treated at the Institute until April 2011 before its release in the coastal waters near Cedar Key, FL.

In May 2016, IRG biologists working at their Big Bend study site encountered a Kemp’s ridley with an unknown microchip tag. The tag was traced back to the lucky Kemp’s ridley that we first rescued during the oil spill! It was found only 26 miles from where it had been released back into the wild. After a thorough assessment the turtle was give new flipper tags and released back into the ocean. The turtle was in good condition and had more than doubled in size since its initial capture 6 years earlier.

Kemp’s ridleys are the most endangered of all seven sea turtle species. Incredible effort was put forth by biologists and veterinarians to ensure each rescued turtle survived the oil spill. The recapture of this Kemp’s ridley 6 years later shows that these efforts were well worth it. The IRG team will continue to look for this and other turtles affect by the oil spill at their study sites across the southeastern United States.

Each summer Inwater Research Group (IRG) travels to the Florida’s Big Bend region to study sea turtles. In 2017, IRG biologists captured the study’s very first hawksbill! The biologists were even more surprised to see that the turtle was tagged. It was uncharacteristically light in color and our biologists suspected that it may have spent some time in captivity. Frequently, turtles in captivity eat more and grow faster than their wild counterparts, causing lighter colored scutes and scales.

After reporting the tags, we discovered that the hawksbill first stranded in February 2016 near Treasure Island, Florida. It was found floating on top the water, acted lethargic, and was underweight. The hawksbill was sent to Clearwater Marine Aquarium for rehabilitation and named “BB” by the veterinary staff. After ten months in rehabilitation, “BB” was given a clean bill of health and released back into the wild near St. Petersburg, Florida.  When IRG recaptured “BB” the turtle had swum over 60 miles north since being released.

Captures of turtles like “BB” give sea turtle conservationist a rare opportunity to track the success of sea turtle rehabilitation programs. We hope to encounter this special turtle on a future trip and continue to update its progress.

Inwater Research Group’s research in the Florida Keys led to the discovery of the first feeding ground for adult green turtles on the east coast of the United States. The study gives our biologists a unique opportunity to sample both adult female and male green turtles in the wild. In 2008, our team captured a female green turtle that weighed 310 lbs and had a shell length of over 40 inches. This turtle also had flipper tags belonging to a different group of researchers. The tags were tracked to Costa Rica and one of world’s largest and most studied green turtle nesting beaches, Tortuguero. The turtle was first tagged by Tortuguero biologists three years earlier while she was nesting.

IRG attached a satellite tag to the turtle and named her “Tica Rica” in a nod to her Costa Rican origin. The satellite track showed that she stayed nearby and was likely feeding on the nutritious seagrass beds at the location. Her behavior suggests that she was using this time to rebuild the energy stores lost during her long distance migration. It takes 2-3 years for a green turtle to rebuild her energy stores and repeat the journey back to nest. Tica Rica was seen nesting again twice in Tortuguero in 2013. Tica Rica is a direct connection between the feeding grounds of Florida and the nesting beaches in Costa Rica. She represents the need to protect sea turtles across borders to ensure their continued survival.