Inwater Research Group Inc. was formed in 2001 by a small group of biologists to fill the need for basic population studies of wildlife in coastal habitats throughout Florida. Our organization is committed to coastal conservation through research on key coastal species and their habitats. 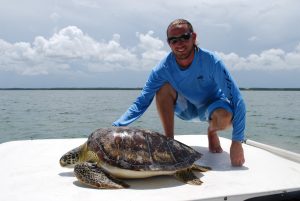 Jeff graduated with a B.S. in Biology from The George Washington University in 2005 and an M.S. in Biology from Florida Atlantic University in 2010.  During graduate school, he explored the regional differences in migratory activity by hatchling loggerhead sea turtles and the effect of reciprocal nest translocations between nests deposited on the east and west coasts of Florida. He joined the IRG team in 2010 and is interested in animal behavior and biological interactions between marine species. 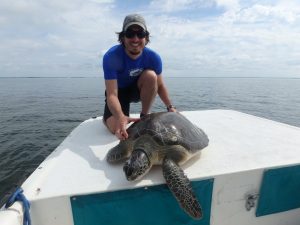 Cody has worked with sea turtles since 2006 on projects ranging from raising leatherback hatchlings to training a juvenile loggerhead for a documentary film. Cody’s research interests focus on animal behavior, nearshore reef ecology, and understanding the effects of anthropogenic stressors on sea turtles. He received his Bachelor’s and Master’s degrees in Biology from Florida Atlantic University (FAU). Cody worked as a Research Assistant at FAU and as a Marine Turtle Specialist for the City of Boca Raton, Florida before starting with Inwater Research Group in 2010. 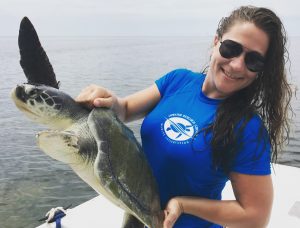 Rebecca received her Bachelors of Science degree in Wildlife Ecology and Conservation from the University of Florida in 2005. After school, she began as a K-5 classroom teacher, eventually moving overseas to teach English.  She moved back to the states after a year and worked toward combining her two greatest interests: research and education. Since 2008, Rebecca has been dedicated to educating school children and the public on the importance of coastal conservation. She currently works as our Education Program Manager and creates all of our educational programs. 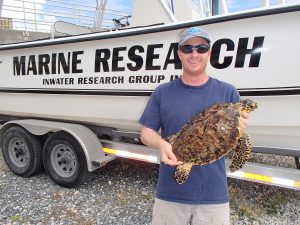 A native Floridian, Steve graduated from the University of Florida in 1999 with a Bachelor’s of Science in Zoology.  Joining the Inwater Research Group team in 2007, he has over 10 years of experience with sea turtles.  He currently oversees sea turtle conservation at the St. Lucie Power Plant in South Hutchinson Island as a Senior Environmental Specialist.

Ryan received his BA in biology from Earlham College where he gained an interest in herpetology and conservation while working with Dr. John Iverson on the Allen Cays Rock Iguana in the Exumas Islands, Bahamas. After graduating in 2003, he began his work with sea turtles. Ryan’s work has been focused throughout the Caribbean and the Gulf of Mexico collaborating with the National Park Service, US Fish and Wildlife Service, The Nature Conservancy, Mote Marine Laboratory and Sea Turtle, Inc. Working with all life stages of sea turtles; Ryan received his Master in Biology from University of Central Florida in 2019, focusing his thesis on population assessments and distribution of foraging green turtles in the Florida Keys. In 2020, Ryan also earned his United States Coast Guard Masters Captains license. His experience in research areas includes mark-recapture, nest surveys, standardized transect surveys and spatial modeling.

Michael’s love for the marine environment began in his early teens during a summer class with Dr. Peter Auger studying diamondback terrapins on Cape Cod. Michael went on to attend Florida Institute of Technology in Jensen Beach, majoring in Oceanographic Technology. He has designed and implemented various projects including mangrove habitat restoration, fish mark and recapture studies, and a wetlands conservation educational program for grade school children. He began working with sea turtles in 1992. His interest in the status of marine turtles in the southern Indian River Lagoon System was the impetus for the creation of Inwater Research Group. Michael is a founding member of Inwater Research Group and as you will see below is fortunate to be surrounded by some of the brightest and most dedicated marine biologist in the field.

Blair Witherington received his BS and MS in Biology from the University of Central Florida and a PhD from the University of Florida. He has conducted work on sea turtle biology and conservation within the Fish and Wildlife Research Institute and has served on numerous graduate student committees, panels, and working groups. He is an adjunct assistant professor at the University of Florida, has served as president of the International Sea Turtle Symposia, and is a member of the Marine Turtle Specialist Group of the International Union for Conservation of Nature. Blair has been appointed to the National Research Council and has authored more than 40 scientific articles, monographs, and book chapters. Blair along with his wife, Dawn, are the authors of the field guide “Florida’s Living Beaches”.

Dean Bagley has 17 years of experience in handling both immature and adult marine turtles with the University of Central Florida Marine Turtle Research group under the direction of Dr. L.M. Ehrhart. Her extensive nesting beach experience was gained while working in the Archie Carr National Wildlife Refuge. She now works regularly in five in-water sites with immature and adult turtles. She began satellite tracking juvenile green turtles in 2000. Dean received her Bachelor’s and Master’s degrees in Biology from University of Central Florida

Steve Traxler received a marine biology bachelors degree from Florida Institute of Technology and a Masters in fisheries from Texas A & M University. Steve worked for the Army Corps of Engineers for 8 years and now works for US Fish and Wildlife Service as a supervisory biologist. His section focuses on Everglades restoration in Broward, Dade, and Monroe counties and Everglades National Park. Prior to that, Steve spent 7 years studying estuarine fish, primarily juvenile drum and their relationship to SAV.

Carrie’s knowledge of sea turtles includes over 20 years of professional experience in marine turtle research, biology and conservation in both the private and governmental sectors. She received her AD in Environmental Technology from the Florida Institute of Technology and a BS from the University of Central Florida. Carrie has managed field studies, technical staff and data collection. Her management experience includes personnel training, scheduling, project planning and development, and proposal preparation.

Dr. Ehrhart is a vertebrate zoologist whose research program is focused on reproduction, population biology, ecologic geography, and conservation biology of marine turtles.  He was awarded the Carnegie Foundation’s Florida Professor of the Year in 2003 and is professor Emeritus at University of Central Florida. His most recent research involves characterization of juvenile and sub-adult sea turtle populations in coastal lagoons and over near-shore reefs, as well as long-term studies of nesting beach productivity. He is broadly interested in herpetology and mammalogy, particularly the distribution, ecology, and conservation of Florida amphibians, reptiles and mammals. He was an invited contributor to the World Conference on Sea Turtle Conservation and the Western Atlantic Turtle Symposia (I and II) and served as Team Leader of the Southeastern Region Loggerhead and Green Turtle Recovery Team. His students have studied the biology of vertebrates as diverse as Hylid frogs, Kinosternid and Emydid turtles and wood storks. 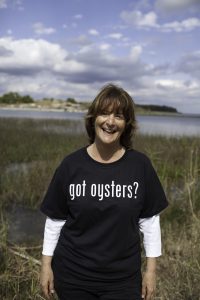 Originally from Massachusetts, Anne has been involved in marine conservation work for more than 30 years in her adopted home of Florida when she came here to get an M.S. degree in Marine Ecology from Florida Tech. She joined The Nature Conservancy (TNC) in 2004.  As TNC’s Marine Program Manager in Florida, she is responsible for guiding work on restoring and managing our coastal systems with a special affinity for oyster habitat. This work includes restoration, management and policy actions, and convening diverse stakeholders to tackle issues affecting Florida’s estuarine systems. Prior to joining TNC she administered Brevard County’s Environmentally Endangered Lands Program, protecting more than 32,000 acres of sensitive lands and managing the visioning and construction of the Enchanted Forest Nature Center. She also serves on the Boards for the Florida Oceans Alliance and Brevard Nature Alliance, and as a member of the Indian River Lagoon National Estuary Program’s Science Technical Engineering and Modeling Advisory Committee, Northeast Florida Ecosystem Restoration Team Steering Committee, Southwest Florida Oyster Restoration Working Group, and the Florida Oyster Science Recovery Working Group.

National Save the Sea Turtle Foundation

US Fish and Wildlife Service

Generous support from the Warnell School paid for haplotype sequencing